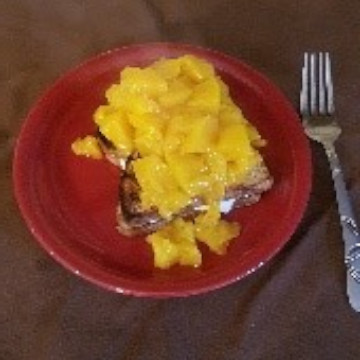 Whisk half of cinnamon, vanilla and 1 egg in a bowl. In a different bowl mix cottage cheese, remaining ½ of cinnamon and vanilla. Spray skillet and soak bread in egg mixture. Cook bread on both sides until done. Spread cheese mixture on one slice of bread. Top with other slice press sides together. Place peaches in a microwave bowl with 1 ½ Tbs of water and cornstarch microwave for 1 ½ minutes or until thickened add remaining sweetener. Spoon over stuffed French toast.